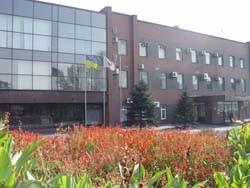 September 21, 1933, the day of starting production of carbon products, prebaked anodes for aluminium electrolytic cells, is considered to be the birthday of Dneprovsky electrode plant. Originally the plant was part of the aluminium plant which, in turn, was part of the Zaporozhye industrial complex,

In 1940, the plant turned into an independent industrial unit and a graphitization shop was constructed which produced the first 1000 mt of electrode blanks. However in 1941, the equipment of the plant was dismantled and evacuated to the Urals. The suffered losses were enormous; the time period for rebuilding was short, and as early as May 1945 production of anodes as well as electrode pastes was resumed. In 1948, the plant was completely rebuilt and started manufacturing with complete work cycles.

In 1994, Dneprovsky electrode works was transformed into  Joint-Stock Company "Ukrainsky Grafit". In recent years, due to self-sacrificing work of its personnel, the plant increased its output and economic efficiency to cover modernisation costs, to improve its  economic indicators, considerably expand the range and improve competitiveness of its products.

The enterprise was always one of the first to develop and introduce new technologies, modern units and manufacturing lines. A lot has been done in the last 10 years. In 1997, a new shop producing carbon blanks entered into operation which had no analogues in Eastern Europe and in Russia.

Application of electric calciners for deep thermal treatment of raw material has allowed us to be the only producer of electrically calcined anthracites in the CIS, that considerably improved operational properties of manufactured carbon products, i.e.cathode blocks for lining the aluminium electrolytic cells and blocks for lining the bottom and the hearth of blast furnaces. Production of materials based on electrically calcined anthracite with up to 100% of graphite was launched. In 2000-2001,  the technique was implemented and production of graphite blocks for manufacturing anodes to be used in magnesium electrolytic cells distinguished by lowered specific electrical resistance and increased service life started. In 2001, a shop was constructed and production of anodes for magnesium industry  impregnated with inorganic compounds based on phosphides started, which has no analogues at electrode plants in the CIS. In 2003 - 2004, production of cold-ramming carbon heat-conducting paste for blast furnaces and also cold-ramming bottom paste for aluminium electrolytic cells started.

Having a favourable geographical location, the enterprise can deliver its export products by railway, by truck, by river and sea transport. Modern and efficient packing ensuring good outward appearance of products and their safety during transportation by all transport is used.

Today the trade mark of  PrJSC "Ukrgrafit" and its products are recognized by consumers, Ukrainian and international organizations. As regards to the range and quality of fabricated products PrJSC "Ukrgrafit" maintains leading positions among manufacturers of similar carbon and graphite products in the CIS countries and successfully competes in the world market.